What was the last post on Facebook that really caught your attention as you scrolled down a busy newsfeed? If you can remember the post, then you probably know what about it got your attention. Maybe it mentioned something that you cared about. Or perhaps it was the ad graphic that caught your eye. Whatever it was, it was probably something you cared about or could identify with.

Facebook is a powerful medium to advertise on because you can create ads and target them to the audience that they’re most likely to resonate with. You have to keep this in mind when preparing your text and graphics for an ad.

There are two primary types of posts that advertisers will use on Facebook and you’ve probably heard of them: the ad and the boosted post. There are several other types of ads, but they’re for more niche uses. We’ll be focusing on boosted posts and the two most standard ad types. 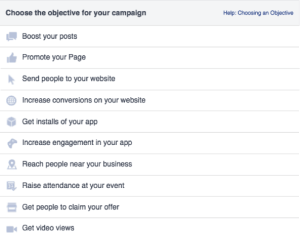 The Boosted Post is essentially a regular status update that you post on your wall and then turn into an ad. It will always show up on your timeline like any post you create. It will also show up on the newsfeed of the audience that you have targeted, even if those users don’t follow your page.

The advantage of a boosted post is that it looks very natural and organic to the user that it is displayed to. It appears as a post on their newsfeed and the only way to tell that it’s an ad is by the small (Sponsored) message shown the profile photo.

Since a boosted post blends in very well on most newsfeeds, an audience may be more likely to engage with it. Online users are naturally averse to ads, so the less yours looks like an ad, the better.

Cons: Appear on your timeline and for your targeted audience, no call-to-action button.

The two most common types of Facebook ads are Send People to Your Website and Increase Conversions on Your Website. Sending people to your website is more effective for generating simple traffic. Increasing conversions is better for targeting those most likely to take a desired action such as making a purchase or submitting a form.

Unlike a boosted post, these types of Facebook ads do not appear on your own Facebook page; they only appear to the target audience you target in the ad set.

Facebook ads also feature an optional call-to-action button in the bottom right corner of the ad that can encourage users to take the desired action.

Pros: Easier to create and split-test, have a call-to-action button.

Your ad copy is extremely important and should never be an afterthought. It can make or break your ad’s performance. Facebook boost posts and ads are broken down into three main sections: text, headline, and link description. 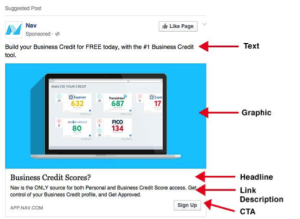 There are generally three types of graphics that people use in ads and boosted posts. When creating or finding your graphic:

The 3 main types of image graphics are:

The best practice is to test a combination of these image types with the same audience to see what gets the most responses.

If you have a great ad or post with a powerful message and a captivating image, but target the wrong audience, then users will just gaze over your ad.

Competitiveness on Facebook is extremely high because many advertisers understand its efficacy. You can make your ads stand out by following the simple tips above. Just make sure to keep in mind that you could have an outstanding ad, but if it’s being shown to the wrong people, then it’s not going to work well. Happy advertising!